The Zero to Productive course is designed to ensure attendees will be able to create their own complete Flutter applications, without supervision, long after the course is over and the instructor is gone. Attendees are provided with a myriad of resources that can be used to solve any problem they may run into in the future. 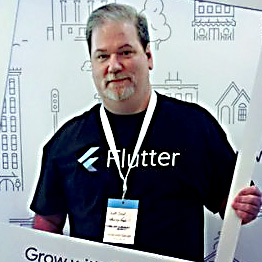 Scott first got involved with Flutter in early Alpha (v0.0.14), less than three months after its first public commit. Nine months after Flutter 1.0 was released he had already conducted well over a dozen talks and workshops in both the United States and Europe and was a contributor to the Flutter SDK. He's been responsible for building large portions of Flutter's worldwide community infrastructure and is an editor of the Flutter Community Medium publication.

The guiding principle of this training method is highlighted in the difference between education and training. The method itself is a continuous cycle of theory, review and hands-on exercises with more review.

Let's Talk
"Education does not necessarily have a practical or defined goal; acquiring knowledge for its own sake is a legitimate goal of education, but not of training."

What You Will Learn

Over the course of three days, attendees are trained in the creation of both static and dynamic User Interfaces, Firebase Authentication and Firestore utilization, Local Storage and multiple approaches to State Management. They will be taught to develop their own templates, find code resources/ packages and how to find help when needed.

In the spirit of “Walk Before We Run”, Day 1 covers static UI elements that do not move or have interaction, as well as a recommended way to organize your Flutter apps.

Picking up the pace, Day 2 is heavy on interaction with how to manage State, then how to trigger changes in that state with touches and use it to drive animations on the screen, as well as navigate between screens. We wrap up Day 2 with a review of packages and community resources in the world of Flutter, so attendees will know where they can go for help even long after the course is over.

We begin Day 3 by going over how to sign in to Firebase, exchange data with Firestore and one of the ways to save data to local storage. Finally, attendees will create a small app after being shown only images of two UI screens and told how to wire them up to each other. Each attendee will use what they’ve learned to make their own decisions about how to approach their design, ensuring they’re able to actually use what they’ve learned throughout the course. Ensuring attendees are able to perform when given images of a mockup is the key factor that differentiates Education (Knowledge for the sake of knowing) and Training, which focuses on one’s ability to perform without close supervision long after Training has been completed.

Trusted by companies of all sizes

Reach out and let us know what you are interested in.