In the first three posts, I explained there were four aspects of a blockchain that this series would explore with a backing implementation provided by the Ardan blockchain project.

The source code for the Ardan blockchain project can be found at the link below.

It’s important to understand this code is still a work-in-progress and that things are being refactored as more is learned.

In the Ardan blockchain, there are three fields in the block header that provide the cryptographic audit trail. These fields provide the ability to guarantee any node’s copy of the blockchain database is a proper copy without fraud. 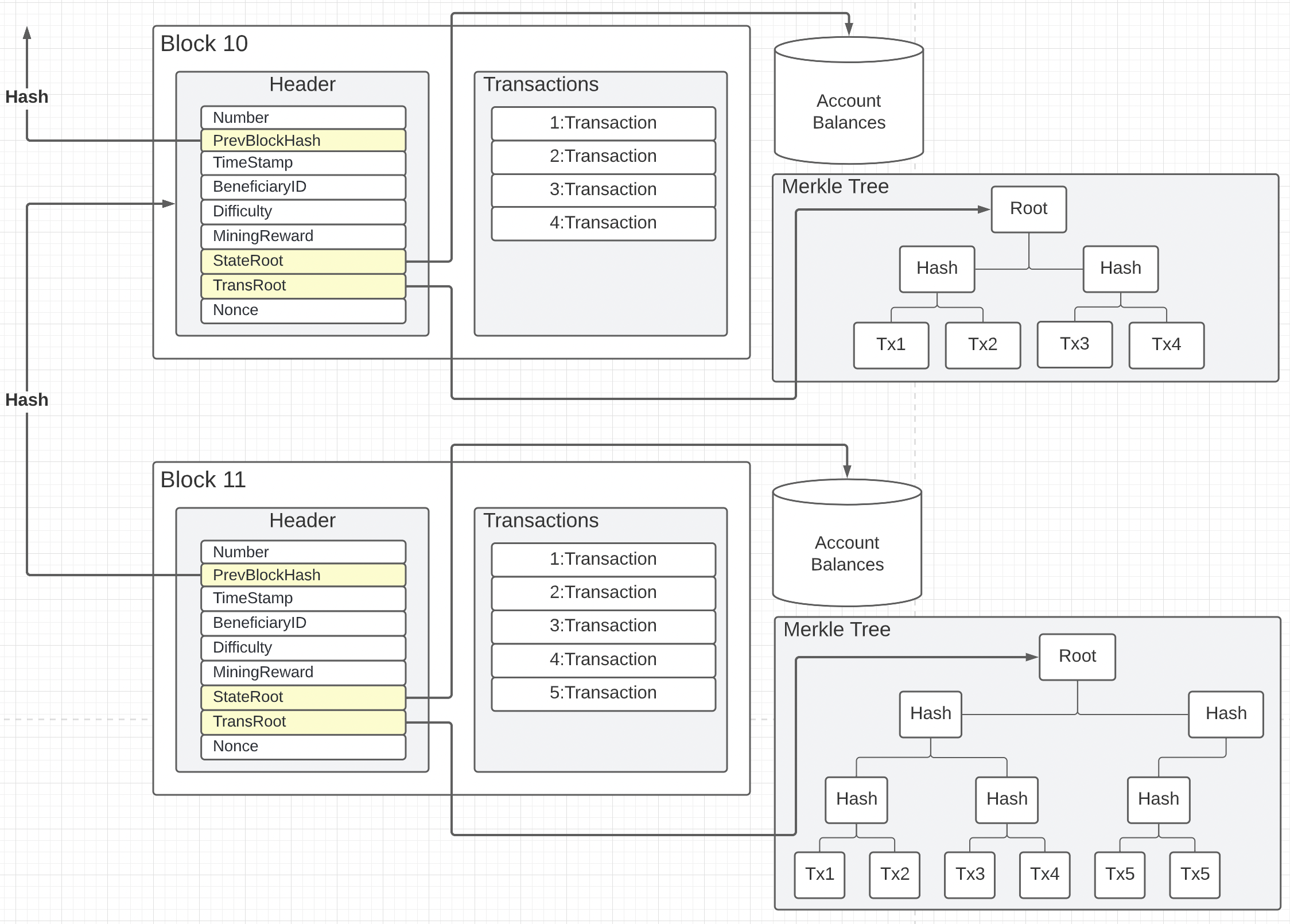 Figure 1 shows two blocks from the Ardan blockchain. Each block contains a header and the set of ordered transactions that belong to the block. Notice in the block header there is a PrevBlockHash, StateRoot, and a TransRoot field colored in yellow with lines going in different directions. These fields make up the cryptographic audit trail for the Ardan blockchain. With these three fields, the entire blockchain database can be verified and checked for fraud.

Every block is chained together by a block number and a hash of the previous block header. When a node receives a new block (say block 11), it must verify that the value of the PrevBlockHash field matches the hash of the previous block header (block 10) currently stored in the local blockchain. If the hashes don’t match, then the node sending the block is currently maintaining a different fork.

Figure 2 shows the previous hash cryptographic audit trail. Imagine a network of 100 nodes competing in mining blocks and suddenly two nodes mine block 10 at roughly the same time. Each node would accept their own block 10 over the other which leads to a fork between these two nodes. Depending on network topology and latency, it’s hard to tell which block 10 the other 98 nodes will get first and accept into their local chain.

Now imagine a random node successfully mine’s block 11 and eventually the block is received by node 1 and 2. When node 1 receives block 11 there is no problem. Block 11 is the next expected block and the previous block hash matches. Node 1 accepts the block into their local chain assuming other validations pass.

When node 2 receives block 11 there is a problem. The block number is correct, but the previous block hash does not match the hash for the block 10 currently saved in the local blockchain. In this case the block is rejected, however node 2 is not ready to admit that their block 10 has not been accepted by the majority of nodes, at least not yet.

Figure 3 shows what happens when node 1 and 2 received block 12 from a random node on the network. As before, node 1 accepts block 12 into its local chain and node 2 rejects the block. The rejection this time is because node 2 is still waiting for block 11 and this is block 12.

In the Ardan blockchain, when a node is behind by two block numbers, it accepts that their local chain has forked away from the true chain and begins what is called a reorganization. This reorganization will require node 2 to remove block 10b and request blocks 10 through the latest block from known peers on the network.

Thanks to each block holding a block number and the hash of the previous block, the blockchain database can provide a guarantee that each copy is an accurate copy and each node over time is maintaining the proper blocks in their local chain. Anyone with all the blocks can recalculate the block header hashes from the origin block to the latest and validate the chain.

The TransRoot field represents a hash of the transactions belonging to a block using a Merkle tree. This field allows the blockchain to provide a guarantee that the set of transactions associated with the block do belong to this block. It can also provide a way to validate an individual transaction belongs to a block as well.

Note: When you have an odd number of transactions, the last transaction is duplicated in the tree to make a proper pair. This is why you see transaction 5 twice.

The Merkle tree provides a single hash for all the transactions in the tree. The order the transactions are loaded in the tree matter. The highest level of the tree contains each transaction itself which is individually hashed to start. As you move up each layer in the tree, new hashes are generated by merging each pair of connected nodes and hashing again until you eventually have a hash for the entire tree, which is called the root hash.

What’s really brilliant about a Merkle tree is you don’t need the entire tree to prove any given transaction does or doesn’t belong to a block. All you need is a small piece of the tree.

Let’s say you wanted to prove that transaction number 3 did exist in both trees.

For the tree on the left, the proof for transaction 3 could come back in an array like this:

Now if the root hash value that is calculated matches the hash value in the TransRoot field, there is a guarantee that transaction 3 belongs to that block.

The StateRoot represents a hash of the in-memory account balance database. This field allows the blockchain to provide a guarantee that the accounting of the transactions and fees for each account on each node is exactly the same.

Listing 1 shows how the accounts database on line 13 is declared. The account database is never written to storage and it doesn’t need to be. Once a new block is received and validated, the transactions and fees are applied to the different accounts. At the start of creating a new block to be mined, a hash of this map is created and stored in the block under the StateRoot field. This allows each node to validate the current state of the peer’s accounts database as part of block validation.

Listing 2 shows how the accounts database is hashed. It’s critically important that the order of the account balances are exact when hashing the data. The Go spec does not define the order of map iteration and leaves it up to the compiler. Since Go 1.0, the compiler has chosen to have map iteration be random. This function sorts the accounts and their balances into a slice first and then performs a hash of that slice.

When a new block is received, the node can take a hash of their current accounts database and match that to the StateRoot field in the block header. If these hash values don’t match, then there is fraud going on by the peer and their block would be rejected.