In the first post, I explained there were four aspects of a blockchain that this series would explore with a backing implementation provided by the Ardan blockchain project.

The first post focused on how the Ardan blockchain provides support for digital accounts, signatures, and verification. In this second post, I will focus on transaction distribution and synchronization between different computers (blockchain nodes).

The source code for the Ardan blockchain project can be found at the link below.

It’s important to understand this code is still a work-in-progress and that things are being refactored as more is learned.

Here is a quick high-level overview of the workflow I will be describing in this post. 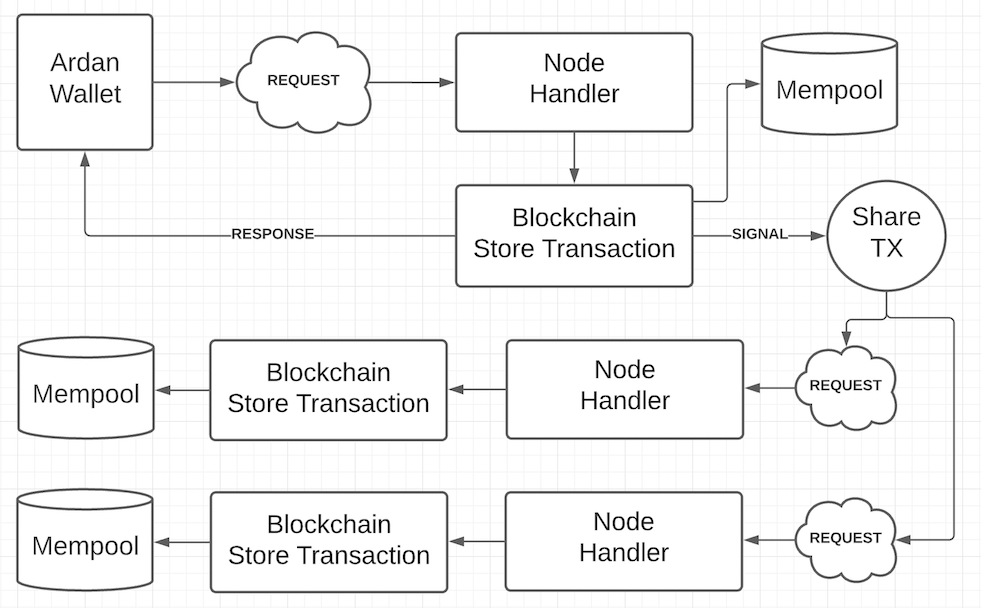 There are lots of little details to make all this work and I will describe this flow by walking through the code.

The Ardan blockchain implements a HTTP based REST API for communication with wallets and between blockchain nodes. This is done to keep things simple since this is just a reference implementation. As mentioned in the previous post, Ethereum uses a JSON-RPC protocol for this same communication.

On line 07, the JSON document provided in the POST call is decoded into a value of type SignedTx. Then with the signed transaction in hand, the SubmitWalletTransaction method from the blockchain/state package is called on line 11. If that call succeeds, the wallet receives a 200 and a simple message that the transaction has been added to the mempool.

Listing 2 shows the SubmitWalletTransaction method from the blockchain/state package that was called by the handler in listing 1. On line 02, the signed transaction is validated against several checks. The main check is to verify the transaction came from a wallet that supports the Ardan blockchain and that the signature is valid for the transaction data that was submitted. Other checks are also performed to validate field level data is formatted correctly.

The mempool is an in-memory cache of submitted transactions waiting to be selected for the next block. With the Ardan blockchain, nothing happens until there are enough transactions in the mempool to start a mining operation. Empty blocks are never mined, however this does happen on other blockchains like Ethereum and Bitcoin.

To better understand the nature and structure of the mempool, a basic understanding of mining is important.

Mining in the Ardan blockchain is a competition between blockchain nodes based on proof of work. At roughly the same time, all nodes pick a set of transactions from the mempool, group them together into a data structure called a block, and attempt to find a proper hash for that block. In the case of the Ardan blockchain, a proper hash has six leading zeros. Finding this proper hash requires changing the block’s nonce field and producing a new hash (over and over again) until a nonce is found that produces the proper hash.

Listing 3 shows examples of what the Ardan blockchain defines as a proper hash. I took these hashes from the blockchain blocks file in the project. You can also see the nonce that helped produce the hash for these blocks. The strategy of selecting a different nonce on each attempt is part of the process. The first node that finds a nonce that produces a proper hash receives a reward, the rest of the nodes have to eat the cost of competition.

Note: A nonce is a value that is only ever used once for a particular thing. Blocks and Transactions have a nonce value and they are defined as an unsigned integer. Watch this video to learn more.

Note: On Ethereum mining happens roughly every 12 to 14 seconds.

This proof of work based process is what drives the consensus mechanics for the Ardan blockchain.

The proof of work here is finding the right nonce to find a proper hash. This takes time and energy, and it can’t happen by accident.

It’s not until a transaction is mined into a block, and that block is accepted by the majority of other blockchain nodes on the network, does it constitute a committed transaction. While the transaction is waiting in the mempool, it’s just pending.

Wallets submit transactions to a single blockchain node of their choosing and those transactions have to be stored and shared across all nodes participating in the network. In the Ardan blockchain, a package named mempool was written to support this functionality.

Listing 4 shows the data structure used by the Ardan blockchain for the mempool. The data structure consists of a map named pool that stores the set of submitted transactions. It also contains a read-write mutex to provide safe concurrent access to the map, and a function that implements a select algorithm for picking transactions for the next block.

The API for constructing a mempool, upsert, and delete is fairly mundane and provides the basic facilities you would imagine.

Listing 6 shows how to construct a mempool for use. Notice the use of pointer semantics for the return type. This is important since the struct type has a mutex. If you make a copy of a mutex, you have a different mutex.

Listing 7 shows the Upsert method. This method is using a mutex write lock before allowing any changes to the map. Then on line 05, the mapKey function is used to construct an unique map key for the specified transaction. With the key, the transaction can be stored or replaced.

Listing 9 shows the Delete method. This method is similar to Upsert in terms of generating the map key to perform the delete operation. With the key, a map delete operation can take place.

Listing 10 shows the PickBest method. This is the function that selects transactions from the mempool that will be used for mining the next block. Each blockchain can choose transactions in many different ways. In Ethereum, the only rule is that address nonce ordering is respected. Geth, Ethereum’s most popular client, uses gas price and time for its default ordering method. But that’s simply the default. Transaction ordering can be further optimized.

This method first copies all the transactions for each account into separate slices. Then the method relies on the selector package for the different transaction selection algorithms. On line 16, you can see the call to the configured selection function. Making this configurable allows you and others to experiment with different selection strategies.

It’s critical that the mempool of each blockchain node is synced and acts like a centralized cache of pending transactions. It allows for more blockchain nodes to select the same transaction for the next block, which in turn provides more opportunity for the transaction to be mined.

Look at the method used to accept a new transaction from the Ardan wallet again.

Listing 11 shows the SubmitWalletTransaction method from the blockchain/state package. Look at line 13, this is where a worker goroutine is signaled to share the received transaction.

Listing 12 shows the signalShareTransaction method of the worker type which is called in listing 10. This code attempts to signal the block transaction through the txSharing channel. If that operation is going to cause the sending goroutine to block, the default option is there to prevent the blocking. To minimize dropping signals, the txSharing channel is constructed as a buffered channel.

Listing 13 shows the runWorker function that is used to initialize the worker goroutines that perform the different concurrent operations required to run the node. On line 05, you can see the construction of the txSharing channel. It’s a buffered channel of 100, meaning 100 transactions can be pending to be sent to other nodes before the signalShareTransaction method will begin to drop transactions.

Note: The number 100 is currently an arbitrary number and more engineering needs to be done with this signal. It works for now because this reference implementation doesn’t have any real production level traffic. It would be nice to batch these transactions and share more than one transaction across the network at a time, maybe on a well defined interval. It’s important there is very little latency when sending a new transaction to other nodes.

Listing 14 shows the shareTxOperations method that runs as a separate goroutine to receive signals for the txSharing channel and perform the sharing operation. The entire function is in an endless loop listening on two channels, one on line 04 to receive a block transaction to send to other nodes, and one on line 08 for terminating the goroutine.

When a signal is received on the txSharing channel, the runShareTxOperation method is executed to perform the HTTP calls.

Listing 15 shows the runShareTxOperation method. On line 02, a loop is declared to iterate over all the known blockchain nodes (or peers). Then on line 04, the url needed to talk to the individual peer is constructed. Finally on line 06, the block transaction is sent to the peer.

The list of known peers is constantly updated by a different goroutine on a timer. This allows each blockchain node to eventually have a complete list of nodes over time.

Each peer has a route and a handler defined to receive the block transaction.

Listing 16 shows the route and handler for accepting a new transaction from a blockchain node. On line 06, the post data is decoded into a block transaction and then on line 11, the SubmitNodeTransaction method is called to add the new block transaction to the mempool.

This second post focused on how the Ardan blockchain provides support for transaction distribution and synchronization between different computers (blockchain nodes). This represents the second of the four aspects of a blockchain that this series will explore with a backing implementation provided by the Ardan blockchain.

In the next post, I will share how the Ardan blockchain provides redundant storage of a single ledger on different computers.