Introducing the Ultimate Go Notebook. Turn your programming into engineering. Get your copy

If you want to put this post in some better context, I suggest reading the following series of posts, which lay out some other fundamental and relevant design principles:

In particular, the idea of value and pointer semantics is everywhere in the Go programming language. As stated in those earlier posts, semantic consistency is critical for integrity and readability. It allows developers to maintain a strong mental model of a code base as it continues to grow. It also helps to minimize mistakes, side effects, and unexpected behavior.

In this post, I will explore how the interface in Go provides both a value and pointer semantic form. I will teach the associated language mechanics and show you the depth of these semantics. Then, I will show how the compiler attempts to intercede for you when you are mixing these semantics in a dangerous way.

In listing 1, the code declares an interface named printer on line 05 with one act of behavior called print. Then, a concrete type named user is declared on line 09 that implements the printer interface using value semantics on line 13.

On line 25, the user value is changed and finally on line 27, the slice is iterated over displaying the name for each user stored inside the respective interface value. 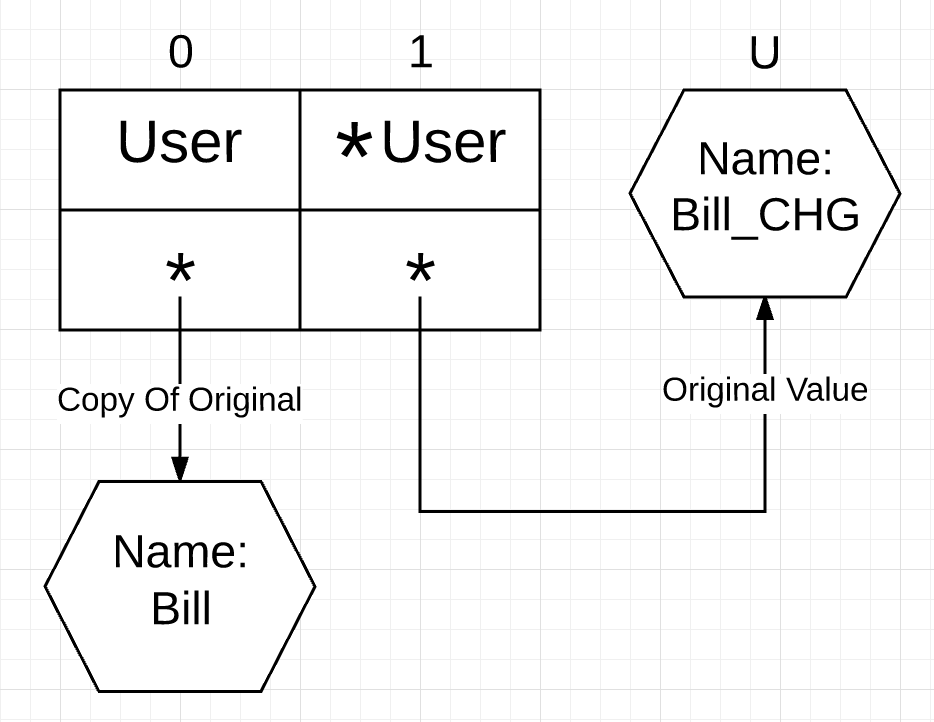 The final output shows that only index 1, the interface value using pointer semantics, sees the change.

This example provided the language mechanics for value/pointer semantics with interfaces, but there is more to learn.

Remember from the other posts I asked you to read, choosing one semantic over the other is a decision that is made at the time you are declaring or using a type. You want to maintain as much consistency with semantics as possible. This example we just went through is showing you how to apply the different semantics with interfaces.

Before moving beyond the value/pointer semantics provided with interfaces, It’s important to review the rules for method sets. Method set rules help describe when a piece of data of a given type can be stored inside of an interface. These rules are all about integrity.

This begs the question – why not allow copies of values to be stored inside the interface when pointer semantics are being used? The answer is a two part integrity issue.

First, you can’t guarantee that every value is addressable. If you can’t take a value’s address, it can’t be shared and therefore a pointer receiver method can’t be used.

This next example shows how you can’t always take the address of a value in Go.

In listing 3, a type named duration is declared and the notifier interface is implemented using pointer semantics on line 11. In the main function on line 16, the literal value of 42 is converted into a value of type duration and then the notify method is called. This call to the notify method causes the following compiler error:

Because literal values are constants in Go, they only exist at compile time and don’t have an address. The notify method requires the duration value to be shared, which is not possible. This explains the first reason why an interface that is implemented using pointer semantics only allows copies of addresses to be stored. The compiler can’t assume that it can take the address of any given value for a type that implemented the interface using pointer semantics.

The second reason is just as important, and I think it is a huge win for integrity. Look at the method set rule again for pointer semantics.

Look at the method set rule again for value semantics:

This part of the rule is allowing you to store copies of values (value semantics) and addresses (pointer semantics) inside the interface if you implement the interface using value semantics. The rule supports the idea that if you change the semantic from value to pointer, it can be safe. However, there is a word of caution related to this idea. Mixing semantics is a consistency issue that must be performed as a conscious exception. Consistency is everything, and mixing semantics can create unexpected side effects in code. This is why the “store pointer” box for value semantics is yellow.

You might be thinking, since the second word of the interface value is always an address to the concrete value being stored inside it, there is always going to be an address that can be used to call the pointer receiver method. Why then would storing a value when pointer semantics are used to implement the interface be restricted?

In fact, in version 1.4 of Go, a change was made to the interface implementation:

“In earlier releases, the interface contained a word that was either a pointer or a one-word scalar value, depending on the type of the concrete object stored. This implementation was problematical for the garbage collector, so as of 1.4 interface values always hold a pointer.”

I want you to understand that interface values from our code perspective are “valueless”. There is nothing concrete about an interface value in and of itself.

This next example provides code to help explain this.

The only thing that makes an interface concrete is the data that is stored inside of it. The method set rules define what data (values or addresses) can be stored based on how the method set was implemented (using value or pointer semantics). Integrity and semantics are what define the rules. How all that is physically done is an implementation detail.

When you run this program you will see that both error interface values are equivalent.

This post presents another example of how value and pointer semantics play a significant role in writing code in Go. The interface can store its own copy of a value (value semantics) or a copy of the value’s address (pointer semantics). I wanted to show how the method set rules are providing a level of integrity checking by not allowing a change in semantic from pointer to value. This promotes the idea that it is not safe to make a copy of the value that is pointed to by a pointer. This mix of semantic must be taken seriously.

As you continue to write code in Go, look at the semantics you are using for any given type. During code reviews, look for consistency in semantic for data of a given type and question code that violates it. There are exceptions to every rule, but I want to make sure that the exceptions are happening as a conscious choice.