List All Posts   RSS
Introduction
In my last post called Concurrency, Goroutines and GOMAXPROCS, I set the stage for talking about channels. We discussed what concurrency was and how goroutines played a role. With that foundation in hand, we can now understand the nature of channels and how they can be used to synchronize goroutines to share resources in a safe, less error prone and fun way.

What Are Channels
Channels are type safe message queues that have the intelligence to control the behavior of any goroutine attempting to receive or send on it. A channel acts as a conduit between two goroutines and will synchronize the exchange of any resource that is passed through it. It is the channel’s ability to control the goroutines interaction that creates the synchronization mechanism. When a channel is created with no capacity, it is called an unbuffered channel. In turn, a channel created with capacity is called a buffered channel.

To understand what the synchronization behavior will be for any goroutine interacting with a channel, we need to know the type and state of the channel. The scenarios are a bit different depending on whether we are using an unbuffered or buffered channel, so let’s talk about each one independently. 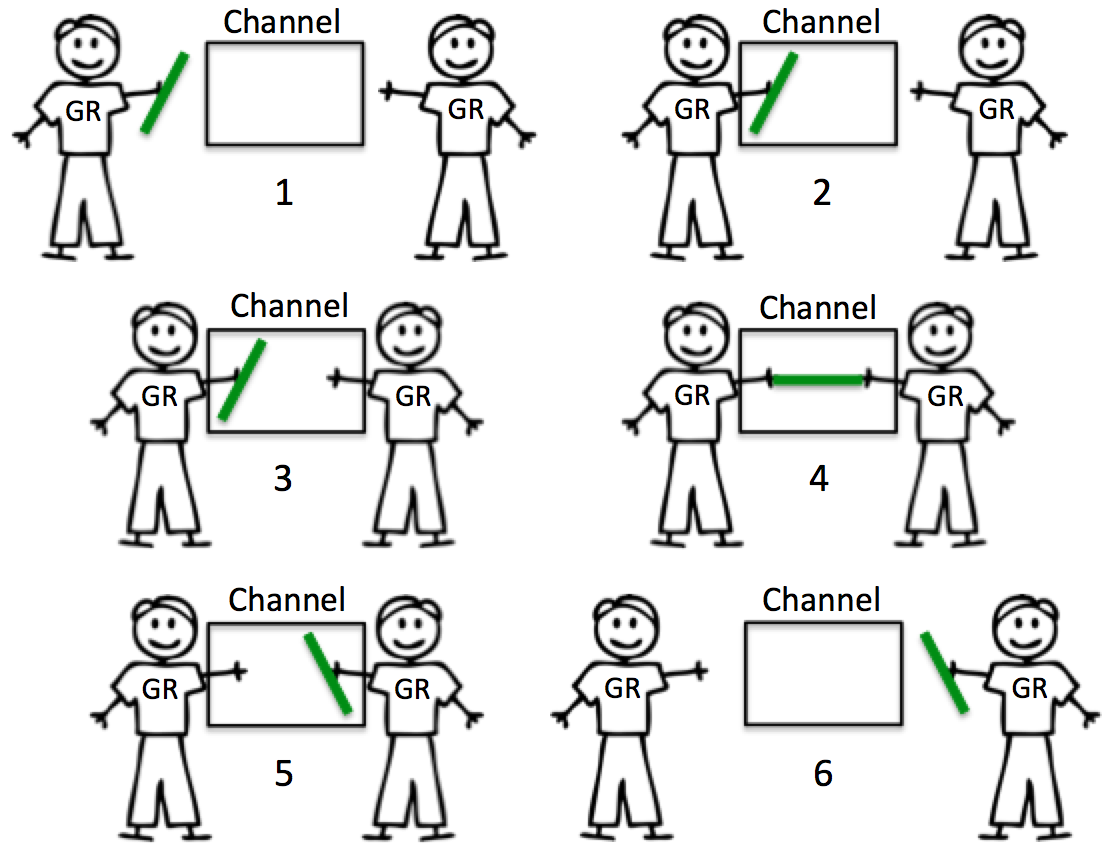 Synchronization is inherent in the interaction between the send and the receive. One can not happen without the other. The nature of an unbuffered channel is guaranteed synchronization. 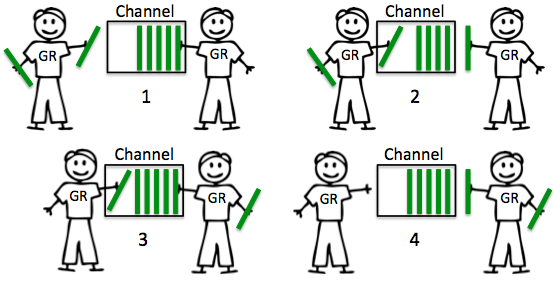 Relay Race
If you have ever watched a track meet you may have seen a relay race. In a relay race there are four athletes who run around the track as fast as they can as a team. The key to the race is that only one runner per team can be running at a time. The runner with the baton is the only one allowed to run, and the exchange of the baton from runner to runner is critical to winning the race.

Let’s build a sample program that uses four goroutines and a channel to simulate a relay race. The goroutines will be the runners in the race and the channel will be used to exchanged the baton between each runner. This is a classic example of how resources can be passed between goroutines and how a channel controls the behavior of the goroutines that interact with it.

// Running around the track
time.Sleep(100 * time.Millisecond)

// Exchange the baton for the next runner
fmt.Printf("Runner %d Exchange With Runner %d\n", runner, newRunner)
baton <- newRunner
}
When we run the sample program we get the following output:

If we look at the rest of the main function, we see a goroutine created for the first runner in the race and then the baton is handed off to that runner. The baton in this example is an integer value that is being passed between each runner. The sample is using a sleep to let the race complete before main terminates and ends the program:

// Give the runners time to race
time.Sleep(500 * time.Millisecond)
If we just focus on the core parts of the Runner function, we can see how the baton exchange takes place until the race is over. The Runner function is launched as a goroutine for each runner in the race. Every time a new goroutine is launched, the channel is passed into the goroutine. The channel is the conduit for the exchange, so the current runner and the one waiting to go next need to reference the channel:

func Runner(baton chan int)
The first thing each runner does is wait for the baton exchange. That is simulated with the receive on the channel. The receive immediately locks the goroutine until the baton is sent into the channel. Once the baton is send into the channel, the receive will release and the goroutine will simulate the next runner sprinting down the track. If the fourth runner is running, no new runner will enter the race. If we are still in the middle of the race, a new goroutine for the next runner is launched.

// New runner to the line
if runner != 4 {
newRunner = runner + 1
go Runner(baton)
}
Then we sleep to simulate some time it takes for the runner to run around the track. If this is the fourth runner, the goroutine terminates after the sleep and the race is complete. If not, the baton exchange takes place with the send into the channel. There is a goroutine already locked and waiting for this exchange. As soon as the baton is sent into the channel, the exchange is made and the race continue:

// Running around the track
time.Sleep(100 * time.Millisecond)

// Exchange the baton for the next runner
baton <- newRunner
Conclusion
The example showcases a real world event, a relay race between runners, being implemented in a way that mimics the actual events. This is one of the beautiful things about channels. The code flows in a way that simulates how these types of exchanges can happen in the real world.

Now that we have an understanding of the nature of unbuffered and buffered channels, we can look at different concurrency patterns we can implement using channels. Concurrency patterns allow us to implement more complex exchanges between goroutines that simulate real world computing problems like semaphores, generators and multiplexers.