Introducing the Ultimate Go Notebook. Turn your programming into engineering. Get your copy

I am working on building code to load polygons for the different Marine Forecast areas in the United States. These polygons need to be stored in MongoDB and there is a special way that needs to be done. It would not have been a big deal if it wasn’t for this fact. There isn’t just one polygon for each area. There is an external polygon and then zero to many interior polygons that need to be stored in relationship.

After staring at the problem for a bit I realized that I needed to create a slice of Marine Forecast areas, each of which contained a slice of polygons. To store each polygon ring I needed a slice of geographic coordinates. Finally each coordinate needed to be stored in a two dimensional array of floats.

A picture is worth a thousand words: 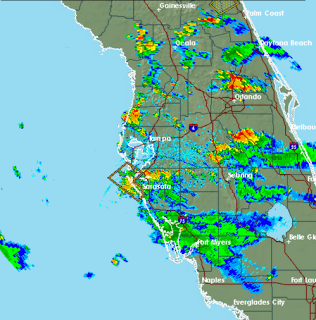 When the data is stored in MongoDB it needs to follow this data pattern: 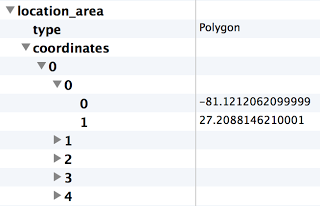 My head is spinning just looking at the diagram and the picture. The diagram depicts how all the slices and objects need to be organized.

The picture shows how the polygons need to be stored in MongoDB. There will be multiple elements under coordinates, each with its own set of points.

I decided to build a test application to figure out how to structure and store the data.

Read these two articles to learn more about slices:

Let’s look at the data structure that will hold and store the data for MongoDB:

// Represents a marine station and its polygons
type MarineStation struct {
StationId string      bson:&quot;station_id&quot;
Polygons PolygonRings bson:&quot;polygons&quot;
}
The Polygon type represents a slice of 2 floating point numbers. This will represent each point that makes up the polygon.

The PolygonRings structure takes on the MongoDB format required for storing polygons. If you want to use MongoDB to perform geospatial searches against the polygons this is required.

The MarineStation structure simulates an individual station and the set of polygons associated with the station.

The test code is going to create one station with two polygons. Then it will display everything.  Let’s look at how to create the slice of marine stations and create a single marine station for testing:

To learn more about composite literals check out this document:

Now it is time to add a couple of polygons to the station:

// Add the polygon to the slice of polygon coordinates
marineStation.Polygons.Coordinates = append(marineStation.Polygons.Coordinates, polygon)
First we create five points. Notice the first and last point are identical. This completes the ring. Then we store all the points into a Polygon object, using a composite literal. Last, we append the Polygon object to the slice of Polygons for the marine station.

Then we do it all over again so we have two polygons associated with this marine station:

Display(marineStations)
The display function uses the keyword range to iterator over all the slices:

for _, coordinate := range rings {
fmt.Printf("Point: %f,%f\n", coordinate[0], coordinate[1])
}
}
}
}
The function takes a slice of MarineStation objects. Remember only the slice structure is being copied on the stack, not all the objects the slice represents.

When we iterate through the slice of MarineStation objects and all the internal slices that make up the object, we get the following result:

Building this quick test application has shown me again how using slices has very real advantages. They will make you more productive and your code perform well. Not having to worry about memory management and handling references to pass data in and out of functions is huge. Take the time to learn how to use slices in your code, you will thank yourself later.